On July 9, 2021, the Rwandan government  announced that it was deploying 1,000 troops to Mozambique, in the Cabo Delgado Province, starting immediately, at  the request of the government of Mozambique, to fight against growing  insecurity and civil war.  The announcement follows the May 26-27, 2021 visit to Rwanda by French President Emmanuel Macron. The immediate deployment of Rwanda troops under Mozambique  military command, despite the reserves by key leaders of Southern African Development Community (SADC) appear to  confirm the information by AfroAmerica Network sources with the Rwandan Government as published in earlier reports.

The visit by Emmanuel Macron had raised a lingering question on why the sudden drive to improve the diplomatic relations between Rwandan dictator Paul Kagame's government and France after so many years of conflict.  AfroAmerica Network sources close to the Rwandan and Mozambican governments had then provided some information on the reason behind the rapprochement:  the on-going civil war in Mozambique.

According to the sources in Rwanda and Mozambique, the on-going civil war following a rebellion by an alleged islamic group in Mozambique is the main reason of  the rapprochement between Emmanuel Macron and Paul Kagame (see here: France-Rwanda: Was Emmanuel Macron visit to Paul Kagame in Rwanda about Mozambique?). In fact, the Rwandan troops will be deployed in the Mozambique region of Cabo Delgado, especially in Afungi,  an area rich in oil, gas and minerals.

For more on Legs of Tornado: The Human Who Outran the Wind, Visit the site Legs of Of Tornado, here

The mineral and oil riches in the region were  under the exmploitation by  the Liquefied Natural Gas (LNG) owned by French multinationals. It is believed that the LNG is the largest French foreign investment in Africa, valued at US$20 billion. The project is owned by the French Total, a multinational oil and energy conglomerate.

Total had to suspend its operations in Mozambique after the site of the LNG project at Afungi was repeatedly attacked by the Islamic State rebels in late 2020 and early 2021, especially in March 2021.

The Rwanda government communication  mentions that the immediate deployment was requested by Mozambique President Felipe Nyusi. The deployment is the execution of an elaborate plan that was adopted as follows: Mozambique President  had  approached the Rwandan dictator Paul Kagame to request that he sends troops into Mozambique as peace keepers. France was then to  help in convincing Paul Kagame and would provide enough funds for these operations.

The execution of the plan followed as follows:

Afterwards, an Extraordinary Summit of the Heads of State and Government of the Southern African Development Community (SADC) was held at Joaquim Chissano International Conference Centre in Maputo, Republic of Mozambique, on June 23,  2021.

The Summit was officially led  by  Filipe Jacinto Nyusi, as  Chairperson of SADC. Felipe Jacinto Nyusi had requested to allow the participation of Rwanda in the meeting. The request  was overwhelmingly rejected by other SADC leaders, especially Angola, South Africa, Zimbabwe, and Zambia.   SADC leaders insisted that any troops to be sent into Mozambique must be under a SADC command.

That is why the Rwandan troops will be sent  and remain under the command of Mozambique military.

What is next:  Will Rwandan troops  help stop teh civil war in  Mozambique and  protect interest by French multinationals?

Sleep & Beyond offers 10% discount on complete range of bedding products. Use Code SBE2021

NBA 2021 Finals: It is the Milwaukee Bucks, for the Championship and Giannis Antetokounmpo, for MVP 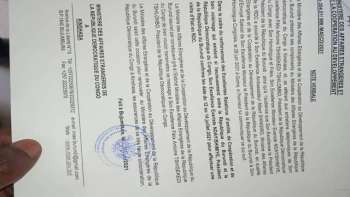 NBA 2021 Finals: It is Phoenix Suns vs Milwaukee Bucks, for the Championship and Chris Paul vs Giannis Antetokounmpo